One of the ways to carry out the shared library injection is to use ptrace system call (syscall). One process (a tracer) attaches to a tracee and calls dlopen inside tracee's virtual memory space.

Superuser privileges (root) are required to attach to any process in the system and to overcome other security controls. It is possible to use ptrace without the root, but both processes must have the same user ID. In the current shared library injection it is assumed that SELinux is enforced as well as dm-verity and a few other security controls.

When a tracer attaches to a target process (tracee), it's possible to read/write data from/to the process' memory, read/write registers, to call mmap, mprotect, to manipulate with memory, to call any system API.

The ptrace syscall is not the only way to trap into a remote process, but the most obvious and powerful one.

I wish to express my thanks to the author shunix for the series of articles about Shared Library Injection in Android.

I use his TinyInjector as a basis, and I extend one to the Android 8.0 realms, particularly to the ARM64 architecture (original version supports 32-bit ARM), SELinux, and the linker namespace.

The help topic of "SELinux Policy Manager" has a pretty nice overview of ptrace (lockdown_ptrace.txt):

Most people do not realize that any program they run can examine the memory of any other process run by them. Meaning the computer game you are running on your desktop can watch everything going on in Firefox or a programs ... that attempts to hide passwords.
ptrace allows developers and administrators to debug how a process is running using tools like strace, ptrace and gdb. You can even use gdb (GNU Debugger) to manipulate another process running memory and environment.
The problem is this is allowed by default.
... It would be more secure if we could disable it by default.
Note: Disabling ptrace can break some bug trappers that attempt to collect crash data.

If you ever thought about any system security hardening, you would have to think about disabling ptrace (together with the root user). However, you cannot disable them altogether, the problem lays in CIA principle (Confidentiality, Integrity, Availability): improving the integrity/confidentiality usually leads to degradation of availability. Disabling the ptrace makes the system to be almost undebuggable and unmaintainable.

In order to attach to any process via ptrace system call, it is necessary:

Root is needed to:

If you don't have superuser privileges, the injector (tracer) needs to have a tracee's UID to be able to attach to a tracee process. 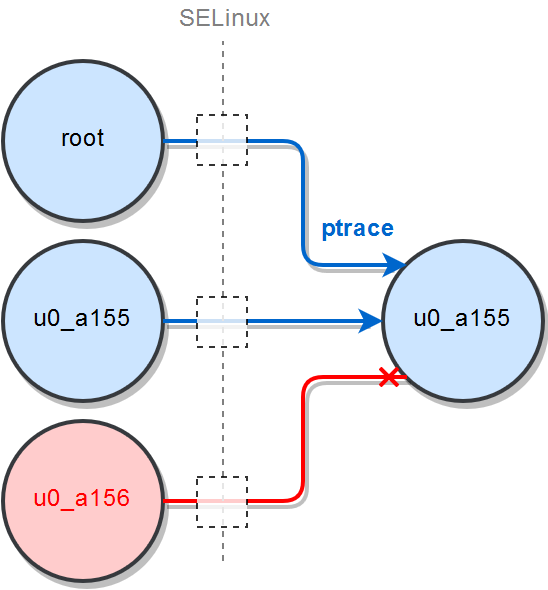 If /proc filesystem is mounted with hidepid option, then an ordinary non-root process is not even able to see other processes in the system.

I haven't had to disable SELinux on my Android 8.0 device. Only root. I tested TinyInjector, launching one from the /data partition, and it works just fine in Android 8.0 having only root:

But, on your device, you might be not able to attach the injector to another process with SELinux enforced. The current version of TinyInjector contains the code to disable SELinux through selinuxfs. The trick to disable SELinux can be shortly described as the following shell script:

I find the way above to be pretty rough to disable SELinux. Depending on a vendor of your device the selinuxfs may be not even mounted (/sys/fs/selinux may not be present in such case). Disabling SELinux may be not allowed on the device. In such case there are a few other ways to deal with SELinux to allow ptrace:

dm-verity protects read-only partitions such as /system and /vendor. Pushing the binaries into /data partition allows to evade altering the protected partitions.

How Injection Is Performed

Initially, TinyInjector supports ARM32 only. One of the differences lays around the low-level implementation of the ptrace() system call.

ptrace() prototype is fairly generalized, but functionality is strongly tied to hardware: ptrace allows to manipulate registers, and concrete list of registers depends on assembler, and assembler comes from architecture of CPU. "Back-end" of ptrace is provided by Linux kernel implementation.

For some reasons ARM64 ptrace usage pretty differs from ARM32.

(Obviously, additional control is provided for the 4th parameter void *data passing the structure struct pt_regs together with length instead of the raw pointer).

Another inconvenience has come from the struct pt_regs definition: the similar struct user_pt_regs is introduced instead, and the register shortcuts are absent there. I added some macro to make code a bit more portable (I haven't found a better way):

PCS stands for a Procedure Call Standard, and it is about CPU rules of how to make procedure calls: how to pass arguments, how to return the value, what registers are expected to get modified during a call, how the stack should be used, and so on.

In the ARM32 PCS the first 4 parameters are passed to a procedure call through R0-R3 registers, and the rest of the arguments are passed through the stack.

In the ARM64 PCS the first 8 parameters are passed through X0-X7 registers to a procedure call. Taking mmap as the syscall which receives the largest number of arguments (6 arguments) among the syscalls in the TinyInjector, all arguments will be passed via the registers. (In the loop below I pass only 6 arguments instead of 8 mistakenly, but it's enough to make mmap work).

As I mentioned in my review of the Android linker namespace, the caller of dlopen can be forged.

By pointing the X30 register (LR) to a code section of any shared library which namespace has wide privileges, we make the dynamic linker of target process to apply desired namespace rules to dlopen call.

When dlopen call finishes, I watch the same effect as a pointing LR to NULL: get the control back after the fault and restoring the running context by setting stored registers.

The final step is to overcome SELinux that denies to mmap a shared library from /data. Use the same trick with a label as before: 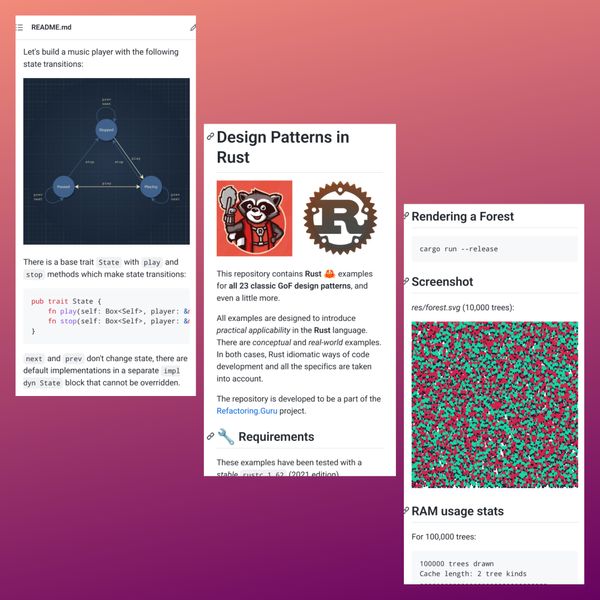 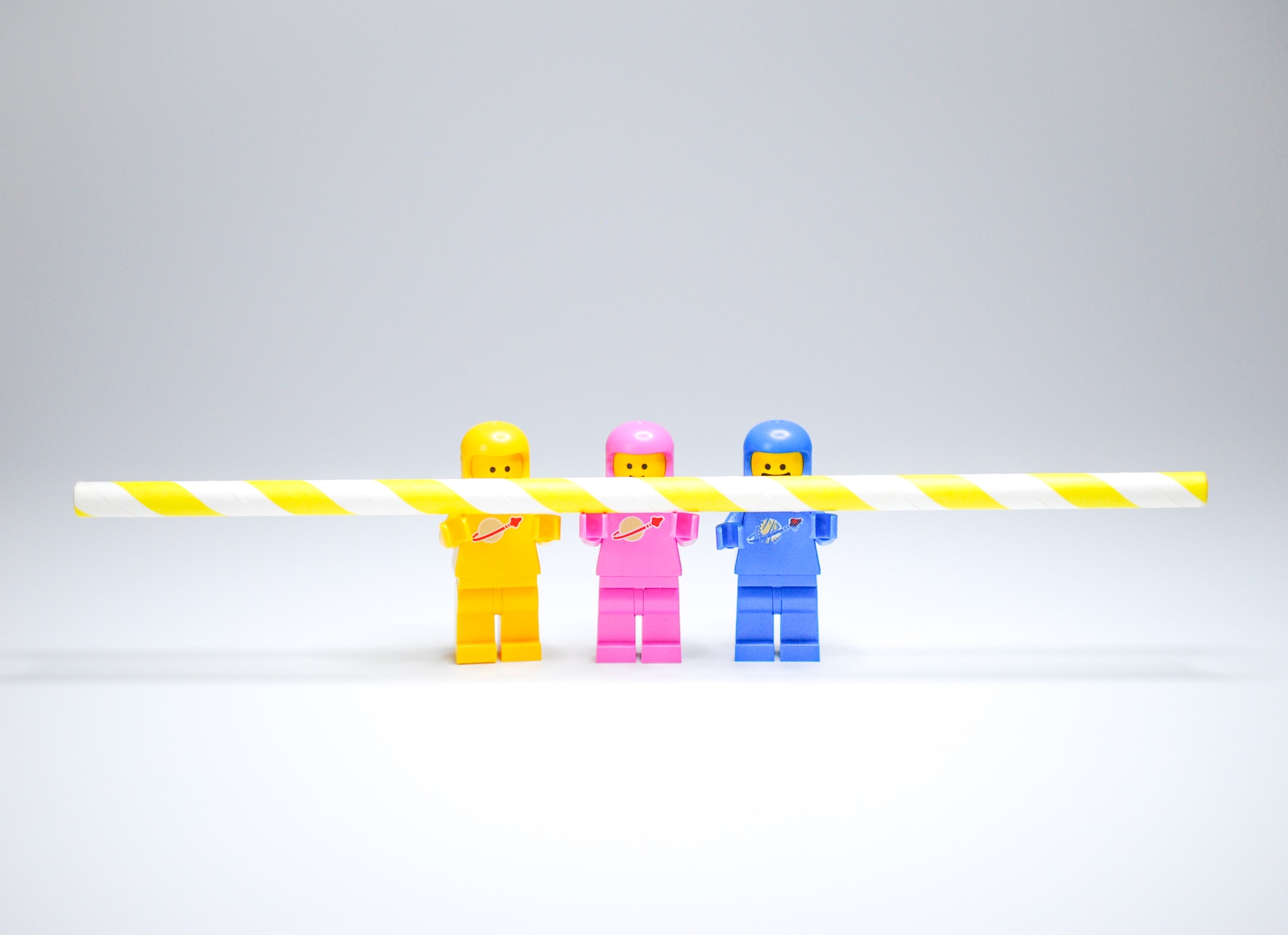 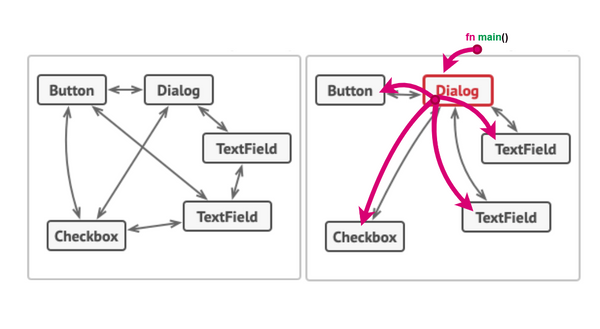